How Long Does a Cat Hold a Grudge? [Secret Info You Never Knew Before]

Cats are notorious for their moody attitudes. In comparison with dogs, they remember things longer if you've ever hurt them. For example, if you accidentally stepped on your cat's tail, she'll let you know in her own way by avoiding you for a few days. So, "do cats hold a grudge" and "how long does a cat hold a grudge" are the topics of debate among cat owners.

Actually, how long a cat holds a grudge depends on its personality and memory. Some cats are friendly and playful, while others are not. If your cat trusts you, she'll forget it within a few minutes. But she might remember it for too long if trauma and risk factors are involved from your side.

Does a Cat Actually HoId a Grudge?

Are you new to owning a feline pet? If yes, you should first know about what a grudge actually is? Your cat might avoid you if she has a traumatic memory associated with you. It is considered holding a grudge against someone. It is not related to anger or resentment. Your feline friend just doesn't want to experience it again. That's why she keeps a distance from you- the criminal.

Cats do hold a grudge but not in the way as humans do. It's mostly not true for kittens since they have a short memory span and soon forget what had happened. But adult cats have evolved a brain similar to humans despite they lack deeper emotions. That's why they get annoyed and quickly frustrated in response to your negative behavior.

But they only avoid the person associated with traumatic memories instead of showing anger. The good news is, they also forgive you if you apologize and show affection to them. But a few cats don't even care about it if they have a trustful relation with you. In other words, a cat's grudge is not more than fear and anxiety.

How Long Are Cat Memories?

How long a cat holds a grudge depends on its ability to recall the events. According to petmd, both dogs and cats have short-term and long-term memories, just like humans. But animal behaviorists and vets agreed that the exact time length of these canines memorizing events is not well-researched yet. However, most pet owners insist that cats can remember pleasureful and unwanted events.

For example, a cat who behaves aggressively at the vet remembers the memories of the last vet visit. Similarly, your furry ball also remembers pleasant times when you offer her treats. Also, it knows that a car trip means confinement in the crate.

The two categories of a cat's memory are discussed below:

Some pet owners think that cats can hold a grudge for more than 16 years. That's a myth and has no reality.

How Long Do Cats Remember Abuse?

Many cat owners want to know how long cats remember the abuse. When we talk about traumatic events, such as being attacked by a dog or squirted with a spray bottle, it will escape and hide from dogs and spray bottles in the future.

Cats remember traumatic events for a few hours to 2 days. If the tortured memory is too bad, it will affect behaviors and last more. So, it is hard to precisely describe how long a cat's memory lasts and how long it remembers the abuse. However, they don't remember the specific events longer than a few hours.

Do Cats Forgive Their Owners?

Most cat owners think that their cat won't forgive them for minor happenings such as stepping on its tail, touching the soft body parts, and accidentally waking it up during sleep. As they don't hold a grudge like humans, they have no intentions of revenge on their owners. Instead, they only avoid you to prevent unwanted future interactions.

On the other hand, cats remember the friendly and bully neighborhood pet friends. They also identify the humans who are friendly and who tease them. That's why they won't pass through the bully pets' street and ignore the human who behaves unfriendly.

Can Cats Get Mad at Their Owners?

Yes, cats can get mad at their owners easily. Many felines don't tolerate any changes in their routine. Similarly, they don't like being touched roughly. So, their body language will be a sign that something is wrong. Your mad cat will show some warning signs:

If you notice these behaviors, calm down your cat when it settles down. Otherwise, the behavior will aggregate.

How to Say Sorry to Your Cat?

If you accidentally hurt your cat and now you want to apologize, wait until your pet's aggression settles down and it comes to you by itself. Petting them, playing with them, and offering treats are the best ways to say sorry to a cat. Again, ensure not to apologize forcefully. Instead, be gentle while touching your cat. 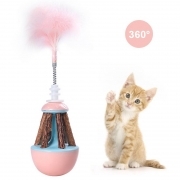 Your cat can recognize your tone. That's why speak politely and friendly and stay as calm as you can. Also, avoid inducing any change in its routine. Instead, sort out the cause of stress. Cats don't like anyone to enter their territory. So, if you provide a calm environment to your pet, it will surrender soon and come to your lap for cuddles.

Finally, you got a complete understanding of how long a cat holds a grudge. The feeling of grudge is different in cats as compared to humans. They lack deep emotions when remembering an unwanted event. They only escape from re-experiencing that event.

Generally, no one knows the precise time length of a cat keeping a memory. Many pet owners believe that cats can recall the events associated with trauma and pleasure. However, whatever the reason is, make sure to calm down your cat. Otherwise, such an attitude will disturb the bond between you and your pet feline.