Why Do Cats Try to Pull Their Claws out? [Reasons, Signs of Abnormalities]

Biting and pulling of claws is a normal and healthy behavior in cats. If you see them pulling on their claws once in a while with their teeth, it doesn't necessarily raise a concern. Almost all cats are neat freak creatures. Your cat chewing nails because he or she is trying to cut them short, make them sharp, or clean the dirt around them.

While it's normal for cats pulling on their claws, owners should be aware of their pet's abormal grooming behavior. If the biting of nails or pulling of claws becomes excessive, there is a slight chance of a behavioral or medical issue.

Licking, chewing, and biting of nails and around the paw pads is a part of your cat's normal self-grooming behavior. They do so to clean up the dirt, litter, debris, and other materials that are stuck in the nails or around the paw pads.

You may even notice them pulling on the claws or biting off a broken claw to stop it from sticking to other materials.

This behavior may seem alarming at first, especially when you notice it for the first time, but the cat's claws grow inside out in a manner that doesn't hurt them.

Their nails have several distinct layers like an onion. When the outermost layer gets worn out or frayed, cats try to pull out the outer layer to expose the sharper and cleaner claw underneath.

If your cat's nail-biting habit has become more aggressive, which is not typical of his or her grooming session, there may be another reason behind it. Signs your cat's pulling on the claw is abnormal:

Abnormal pulling on claws or excessive nail-biting is either because of medical or psychological reasons. Abnormal citing on the nails is very noticeable in cats. An abnormal nail-biting usually indicates an infection that's making the cat pick at her paw or feline anxiety.

In many cases, the normal self-grooming habit in cats turns into obsessive behavior causing excessive chewing, biting, and scratching. It happens when the cat is stressed, bored or anxious. Like humans stressed cats also bite their nails, lick their paws or pull on their claws to soothe themselves.

They can be stressed out for several reasons. It can be because of the other pets at home, moving or a new place or maybe they want to go outside. You have to find out the reason to help stop this obsessive nail-biting behavior.

If you are sure that there are no psychological issues with your cat, there can be an underlying infection. The only way to confirm an infection is by consulting a vet.

What to do if your cat pulls his claws?

If you are worried about your cat's abnormal pulling of claws, a visit to the nearest vet station will put your mind at ease. They will be able to determine whether the behavior is normal, psychological, or there's an underlying medical condition.

If you see any of the below-mentioned symptoms head to the vet.

How to stop cat from biting their nails?

Buy scratching posts for your cats

Cats are able to keep their nails well-groomed without a lot of biting and chewing. The reasons you see them always picking at their nails may be because they don't have a suitable place for scratching. 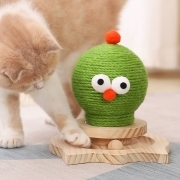 It's a good idea to trim your cat's nails if you don't have a scratching post. Outdoor cats don't require a nail trim because they have the opportunity to scratch and keep their nails well maintained. But, for an indoor cat, who spends most of his time inside the house, it's important to either trim their nails or provide scratching posts.

If you have identified stress as the cause, here's what you can do to help your kitty:

How to prevent cats from pulling on their claws?

Scratching helps cats to shed their old claws and keep them clean and sharp. Indoor cats when don't get the opportunity to scratch they pull on their claws.

Is it bad if cats bite their nails?
It's normal for cats to bite their nails as it's a part of their self-grooming habit. They do this to keep their nails clean and sharp. However, excessive biting of nails may imply other issues such as anxiety or an underlying medical condition.
What happens if a cat's nail comes off?
If the entire nail comes off, wait, don't panic, you can wait until the bleeding stops. Then soak the paw in warm water and add some Epsom salt. Do this twice a day. Monitor the nail for a few days for any infection.
If the nail is still attached, you may need to head to the vet to have it checked.