My Cat Seems A Bully, How to Stop it?

Wondering how to deal with a cat bullying another cat? You've come to the right place if you want to stop cat aggression at home.

Why Cats Bully Other Cats

Most cats act up to other members of their kind when they are insecure. They are total introverts and "lone wolves" unlike dogs who are pack animals. So, cats may be the pet that finds it most difficult to socialize. But that is not the only reason for inter-cat aggression and dominance assertion.

How to Tell if it is Really Bullying

Play fighting is normal amongst felines. They pounce, slap, claw, bite, chase, hiss, and do all sorts of things; partly in play, partly to practice life. But things should go back to normal almost immediately or after they had some time alone or are distracted. Here are some signs that the catfight at your home is the thin end of the wedge:

Covert bullying, or acting nicely in front of you and bullying later, is something only a more impish cat would do. The innocent cats around such low-key "Lokis" will need extra attention. If one cat is afraid of the other for no apparent reason or is suspiciously injured, go ahead and monitor their time together, apart from you.

Observe them and identify the triggers

It can be related to behavior, health, food, environment, or any of the reasons we discussed. Only then can we figure out how to deal with the problem.

If the fighting is too often, intervene before things get too nasty. Keep at least the bully cat busier than a one-eyed cat watching two mouse holes.

Note that treats, attention, or other rewards should not be how you distract them. This will only make them register that bullying is rewarding. Use toys, pocket lasers, or other techniques. We will be discussing this in detail soon.

If the two cats are impossible to control around each other or one is being bullied to the point of getting hurt, you can try and isolate them. When both the bully and the scaredy-cat have calmed down, try to bring them back together with care as if they are new to each other.

When the cats can mingle with each other and one can be bullied, make sure you have supplied enough of their favorite food or toys. Do not use food or dearer toys once the aggression has started. Keep distracting options ready at hand's reach. Provide positive rewards when they are behaving well.

Acquainting Them to Each Other's Smells

If the cats are not ready to be fed together or introduced, feed them at either side of a barrier. This will let them adjust to each other's odors. Eating together promotes bonding in most animals including cats and humans.

Use opaque barriers until they have calmed down to the experience. Take things slow and switch to more revealing barriers like glass or wire mesh. Cages will do. Finally, start removing the barrier once they are acquainted with each other's smells, sounds, and sights while eating.

You can also keep switching the spaces the cats are provided to make them comfortable to the other cat's scents faster.

Ask your veterinarian if certain pheromones, natural extracts, CBD oils, or essential oils should be diffused during encounters to diffuse the tension. Your vet may also prescribe some direct medications if they are needed and if they will help.

If both your cats love being massaged and will calm down at the time, try massaging them together. This may help them calm down around each other.

Increase the Resources and Facilities

If there is no room to swing a cat, your cat won't like it either. Cats are not only territorial but also need space. They are possessive about their food, facilities, and space. So having some surplus ready is always good, especially if there is aggression is involved.

Neutered cats are less likely to be aggressive. Their hormones are usually under control and they do not get aggressive due to heat. Spayed females, in addition, steer clear of aggression that occurs during and right after pregnancy.

"No" Should Be a Serious Reprimand

A bully cat will not respect the bullied cat's resistance. But both cats should be trained to stop at your command. Let's be more specific.

The bully cat should be trained to stop at "No!" for obvious reasons. But if the bullied cat exhibits some deliberate or unintended triggering behavior, it needs to stop as well.

Look out for any such triggering behaviors or signs of aggression so that the embers can be extinguished in place of fire.

If a cat is unwell or resting after a procedure, keep other cats away from them. This rule does not regard the bully or the bullied but is a general one.

Cats too tend to be emotionally and physically vulnerable when they have health issues. So, if they are bothered by other cats when they are unwell, cats can develop trauma. This trauma can evolve into aggression or fearfulness over time.

Talk to other cat owners who have multiple cats. If they have the same problem, help each other through the problem.

Reach out for medical help before things get out of hand. Your vet or vet behaviorist can help you solve the issue through medicated or non-medicated therapies.

How to Stop a Cat Fight?

Bullying or other kinds of aggression - distraction is the only way to break up a fight between cats. Use toys as the go-to object of distraction. Laser points can be missed when the cats are busy fighting or defending themselves.

Toys or objects that quiver can be used to catch the attention as they will switch from fighting mode to hunting or playing modes. Jingling or squeaking sounds and water sprayers can also be used. Any harmless measures can be employed if you can keep your fur babies out of harm's way.

Now it is important to remember that you should not physically try to separate fighting cats. But, if the need arises and you have no other option wear long, secure mitts and go in. Be very careful about your safety, should you need to do this.

If the cats walk away and return calmer, give them a shot in the arm with treats, toys, or love. 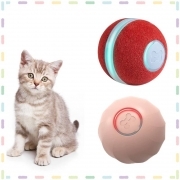 An Underrated Technique that Works

Isolation time should provide enough time and space for them to relax. So, if possible, sequester the aggressive cat and bullied cat alternatively.

While one is releasing its built-up tension, the other can be locked up comfortably. Offer them equal amounts of time alternatingly. If one cat inherently needs more time out, adjust the timings accordingly.

They can be reintroduced when fed and under supervision, especially if there is no food aggression. As the truce grows, increase exposure. Again, keep distractions ready lest some bullying happens.

You will be totally walking on eggshells at most points of time, but it will be worth the effort.

If enough attention is paid right from the start of your journey together, cat aggression can be prevented.

Cats fight! For fun, for practice, and obeying their instincts, cats need to fight each other. But they also need to be at least okay with having each other around at other times. Once they are acquainted enough, they should be able to share their resources, lick each other, cuddle, and even team-up.

But if the game isn't funny anymore and rather nasty, then it needs to stop. Luckily enough, you can prevent and deal with cat bullying if you can invest the time and patience to follow our guide.